Throwing us a bone 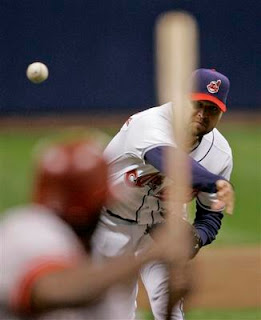 Before I say what I'm about to say, let me preface:

I like the re-signing of Jake Westbrook in principle. It underscores that the Dolan regime is at least trying to do things the right way. We might bellyache as fans about how the Indians can never seem to land the big fish in free agency, but the big thinkers who run the Indians seem to realize that the quickest way to sour a fan base is to let your own players walk away, year after year.

In that sense, maybe all the suspicion directed at Larry Dolan and his purportedly tight purse strings is helping matters. Maybe Dolan is going out of his way to prove he's not cheap by inking Westbrook, Cliff Lee, Grady Sizemore and Jhonny Peralta to long-term extensions in the past year-plus.

If the Dolans can't paint the brilliant brushstroke that makes the Indians the peerless alpha dog of the American League (a rather unrealistic goal as it is), they are at least ensuring that the quality stable of talent they do have is staying put for the next three-to-five years.

Sure, $11 million per is a bit much to be paying Westbrook, a middle-rotation starter who is this era's equivalent to Charles Nagy or Dave Burba, but following an offseason in which Ted Lilly and Gil Meche received the Sun, Moon and stars, what can you do? Fair market value, that fickle barometer of a player's worth over which agents and general managers haggle constantly, is always swinging in the player's favor, especially when said player is a starting pitcher who is good for double-digit wins every year.

Besides, it's pretty safe to assume that the Indians will get more bang for their buck from Westbrook than, say, the Cavaliers have gotten for their $60 million investment in Larry Hughes.

Overall, snowstorms and Roberto Hernandez appearances notwithstanding, life is pretty good for the Indians right now. Every major piece of the team is in place for at least two more seasons.

But when you live in Cleveland, and next year is all you have, the months tend to melt away pretty quickly.

The concern in this corner is that the Westbrook signing will serve as a pacifier to be shoved in the mouths of rankled, anti-Dolan Tribe fans in the event the two biggest -- and soon to be most expensive -- pieces of this team, Travis Hafner and C.C. Sabathia, aren't re-signed prior to hitting the free agent market following the 2008 season.

If Hafner and Sabathia walk away to more money elsewhere, Indians management could hold up the $33 million they just gave to Westbrook as proof that they do, in fact, spend money.

But this Westbrook deal was a layup compared to what it's going to take to get Hafner, and even more so Sabathia, to put their signatures on an extension.

Hafner is one of the top 10 hitters in the game. Sabathia is a borderline-elite starting pitcher. Already, Sabathia has made no attempt to cover up the fact that he's drooling over the size of the contract he'll be able to reel in the winter after next.

I've stated previously that losing Sabathia potentially wouldn't be as much of a blow as losing Hafner. The Indians have one of the game's best pitching prospects, Adam Miller, on the horizon. They have no such hitting prospect to fill Pronk's shoes. If Sabathia prices himself out of the Indians' range, and there are millions of reasons to believe he will, there are other options within the organization. With Hafner, they are forced to either pay him, or look outside the organization for a replacement bat who can deliver 40 homers, 120 RBI and a .300 average every year.

Though there are always ways to replace players, how the Indians handle their attempts to re-sign their No. 1 pitcher and cleanup hitter will determine, above all, how they are judged by the fans. The good feelings surrounding the Westbrook signing are going to have long since evaporated by the winter of '08. There will be no public-opinion parachute for Indians management if Hafner and Sabathia walk away.

If the Indians can't re-sign one or both, the player who leaves had better come off as a moneygrubbing mercenary with the loyalty of Benedict Arnold, someone who tried to squeeze every last dollar out of the market and turned down a generous offer to stay in Cleveland.

If the Indians make token offers to Sabathia or Hafner, let them walk away and then point to a richer, happier Westbrook as evidence of deep pockets, it's kind of like the wedding guest that immediately gravitates to the toaster or serving dish on the bridal registry and leaves the television set for the other guests to purchase.

Yeah, they bought the newlyweds something. Sure, they accept it with a smile. But every aunt and uncle in 12 states just bought them a toaster for the wedding shower. Are they going to remember that you bought them a two-slice, bagel-compatible toaster, or that some other guy bought them a 32-inch TV set?

Westbrook is the Tribe's toaster. Useful. Practical. Necessary. But you won't remember his contract extension if Sabathia and Hafner are playing for other teams in 2009. And you will blow your stack if ownership tries to fix you a Pop Tart while fans in New York or Boston are watching The Sopranos' final season DVD in high definition on a TV that once belonged to you.
Posted by Papa Cass at 11:51 PM

Not to knock the signing of Westbrook, but I can't get this thought out of my head.
Three guys the Indians wanted to sign: Sabathia, Hafner, and Westbrook.
In typical Indians fashion, they sign the least talented, cheapest one.
Which is not to say the Westbrook signing isn't a good thing.
But can we stop with the character discussion in Cleveland?
I'm sorry, Mr. Shapiro, but someone who lives from paycheck to paycheck may have a hard time giving a guy credit for signing an 11-million-dollar a year contract.
How will he ever get by?
No disrespect to Jake, but the last 10 years in pro sports have taught me character means nothing. There isn't a person at Jacobs Field who wouldn't trade character guys like Westbrook, Casey Blake and Jason Michaels for Gary Sheffield, Kenny Rogers or Milton Bradley if it meant a title.
We shouldn't have to give guys credit for being upstanding members of society. That should be expected, as should winning.

This is kind of like the signing of Eric Steinbach- good in principle, but it depends what they do with it.

If the Tribe doesn't sign Pronk and CC, pointing to Westbrook isn't going to please anyone. Sure, you're trying, but you didn't follow through.

Same with the Browns. Steinbach is a great start, but the signing isn't an excuse to ignore the line during the draft (yet again).

Both these moves are nice starts.

But show me more.

Papa Cass
I am an award-winning writer from Cleveland, Ohio. My works have been published in The Plain Dealer Sunday Magazine and Crain's Cleveland Business. In my full-time job, I am a writer/editor for Smart Business Network, a Westlake, Ohio-based chain of monthly business journals with editions in nearly 20 cities nationwide. An avid sports fan, I live and die (mostly die) with the Browns, Indians and Cavaliers.